January 15, 2013
So it's a new year so time to set some new goals! AND STICK TO THEM!! I didn't really have many goals last year, I didn't write them down so I could make sure I worked for them, but this year that's going to change! 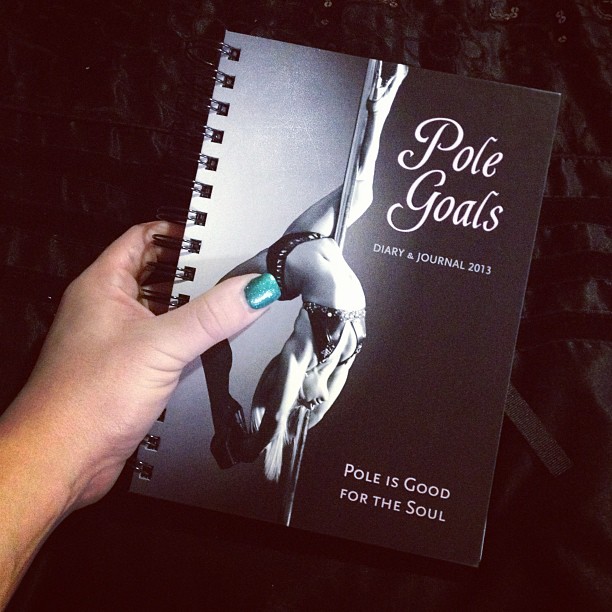 First things first! I have a new pole book! It was hard to part with my old one, I love it, but it was falling apart so I decided it was time for an upgrade! Something a bit brighter so I went for a bright pink/orangeish number from Typo. I've also separated it into sections for certain performances/comps that I want to do this year. Each section has enough space for me to stick in pictures for costume ideas and write down combos and eventually the whole routine if I feel I need to! I also got one of Lou Landers Pole Goal Diary's for Christmas to help me be a bit more focused on what I want to achieve, it's fantastic, it has a section each month where you can write down your goals and two sections in the back to write more details on what your goals are and how you are going to achieve them.

So here we go:

Goal 1: I'm not sure if this is really a goal but more of a must do. Enter Miss Pole Dance Australia again! After watching the finals last year I decided that if I didn't enter again this year that I would sit in the audience at the NSW heats and regret that I didn't give it a shot. So like last year I'm aiming to be super prepared and I can tell you that things already are falling into place routine wise. I've got a theme, music and idea's for my costume (including the colours that I want it to be). The whole idea gets me really excited every time I think about it which is a good sign. I can't wait to start working on it!

Goal 2: Deadlifts. I can do a pretty decent deadlift when I'm feeling stong, however most of the time when I train I tend to do one and then decide it's to  hard and move on to something easier. Not this year. This year I want to make sure that every time I go into train I attempt at least three deadlifts, I figure the more I do it the easier it will get right? (also when three becomes easier I'll make that number higher). I also want to get the cartwheel like version of the deadlift as well to me it seems cleaner and just looks nicer than the way I do it.

Goal 3: Freestyle more. I say this all the time, that I'm going to freestyle more so I get better at it and I never really do. But 2013 is the year I'm going to stick to it! I've already freestyled once this year, and video'd it. But don't ask to see it, it's pretty dreadful and I refuse to put it up on YouTube. Sorry.

Goal 4: Muscle up. So the Muscle up is a move that I found on YouTube last year and was like OMG I want to do this. Showed the video to my friend Andre and then did nothing about it while he worked on it and got it. I figure now is as good as time as any for me to start trying it, I've given myself till the end of the year to achieve it cause it's pretty hard and requires a lot of strength.

Goal 5: Be more consistent with this blog, cause I tend to spew out a lot of post then do nothing for ages cause I get lazy. No more of that!!

Goal 6: Video more. It's probably one of the best tools for picking up on things you're doing wrong and fixing them. Sometimes things feel good when you're doing them but when you watch them back you look at it and go WTF was I thinking?

Goal 7: Spatchcock! The one move that I have wanted to be able to do for years (for no other reason than to say that I can do it), but I always start working on it, then give up after a couple of weeks. Not this year, by the end of this year I will have nailed the bloody thing! (I want this even more now after seeing Cleo get it on the weekend). 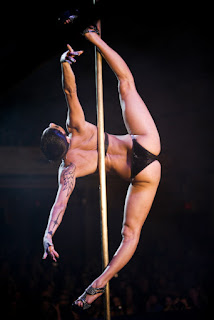 Goal 8: Improve my flexibility. Something I always say I will do, start out and then get bored with it and do something that's more fun. Well if I want to nail Goal 7 I'm going to have to get serious about this. While I have a middle split  I still don't have the right flexibility to get the spatchcock.. YET!. Also there was a new trick I was working on last year that I can do now that I need better flexibility for so I don't want to do it in a routine yet until I can get it perfect!! So I've booked into a Flexibility class on Saturdays at Bobbis Gold to get me on the right track, here's hoping I can commit to stretching 5 times a week.

Goal 9: Forget dieting. Yep, I've decided to throw away the scales. I don't care what I weight any more  the most important thing is that I'm eating healthy and exercising. The rest will take care of itself (I hope). I'd much rather concentrate on how my body feels and looks than looking at the numbers on the scales!

Okay so I have nine goals to start with, and I'm sure there will be more. I can also tell you (since this post has taken me forever and a day to write) that I have accomplished one of the goals on my list already YAY!! Which one? Well you'll just have to wait to find out!!