Kicking Carbs to the Curb!

September 26, 2012
So pretty much as soon as I walked off stage after my routine at MPD I've done nothing but eat, and eat crap (well for about 2 weeks). For about the last week and a bit I've been eating better, with the odd slip up here and there (who can say no to birthday cake?). 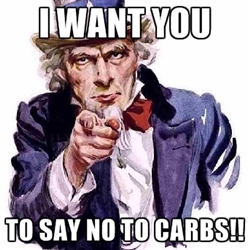 Lately though, I've been noticing how absolutely gross I feel, I know why, because it always happens after I eat something high in carbs, like bread or white rice, or sugar. Seriously I ate so much sugar on Sunday and I've never felt so sick so quickly. I've come to my own conclusion that while I love carbs, my body doesn't. So here starts project cut out the carbs! Not only so I can loose weight but so I can feel better too, I hate feeling gross, but most of all I hate feeling sick.

I've been telling a friend of mine how much I admire her body, that I love that she is toned and fit but still looks like a woman. And she keeps telling me, cut out the carbs, eat lots of protein. So here I am, back at square one. When I started loosing weight last year I had actually been on a high protein diet and was feeling fantastic, I can't tell you why I fell of the wagon, it was most likely because I got lazy. I do that a lot, especially when it comes to eating well. Because it's much easier to pull into McDonald's on the way home from training than it is to go home and actually cook something.

I have vowed that tomorrow I'm going to start this, I'm heading to do some grocery shopping after pole tonight to stock up on a few things including buying some slim pasta and slim noodles. Basically it's made out of a vegetable called konjac which is low fat, LOW CARB and high in fibre (it's also gluten and dairy free). I have no idea what it tastes like but I guess I'll soon find out. If you want more information on it have a look on the Slim Pasta Website . Hopefully it tastes okay, it'll be a great way to trick my mind into thinking I'm eating carbs when I'm not.

I was at one stage considering doing the Michelle Bridges 12WBT after seeing the results my friend Renee has had with it, but to be honest, I'm not sure if it's for me. A lot of the recipes she's shown me do have carbs in them, so I think I'll give it a miss this time. What I'm going to do is go back to where I started, the Dukan Diet (find more information here), mainly because I know it worked for me and my body. Which is the most important thing, finding something that works for you. Some people can eat a lot of carbs and be fine, for example, this girl at work, I have never seen someone who eats so much bread and other carbs and is stick thin!! I only have to look at a carb and I put on weight, it's so unfair!!

Anyway watch this space!! I am determined to stick to this.