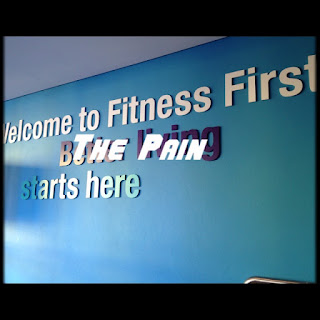 As part of my training for MPD I not only train on the pole, I also try to make it to the gym at least twice a week (only twice because I'm at the studio for class or training 4 days a week). And because I do tend to wander around the gym looking at the equipment more so than using it I decided to hire a Personal Trainer to help me.

The first trainer I had a few months ago decided to go back to his old job which I was a bit bummed about, he however passed on my details to one of the other trainers there that he told me, in his opinion, was the best. Starting with a new PT is a little bit of a pain as you have to go through that whole "I need to test what you can do" process again, which can either leave you in so much pain the next day you can barely hold a pen let alone dress yourself, or you don't get a work out as hard as what you usually do.

My current PT, loves Kettlebells, (I love them too, until I have to use them. Then I would like to throw a 24kg Kettlebell at the head of the evil bastard that invented them) so pretty much every session involves at least one or two exercises with them.

At the moment we're focusing on strengthening my oblique muscles, which will help me with things like Iron X's and Dead Lifts, while I can do both I do feel like this is one of my weakest areas because I don't use them as much. As each week goes by I have noticed that I'm getting stronger, I can hold my Iron X's for longer can come back up into a Static V a bit easier and can now Dead lift with one leg straight (the aim is to get it with keeping both legs straight).

I only do half an hour sessions, which doesn't seem like much, but you'd be surprised at how much evil can be inflicted on a person in 30 mins. Last Tuesday, I'm sure my PT had an extra helping of evil with his breakfast, the session was an absolute punish and I managed to burn just under 400 calories in 30 mins. Last weeks session involved a rope that he threw over a beam so the rope was over both sides, then on one end of the rope was me (holding it in my hands), on the other end of the rope a 24kg Kettlebell. My job was to pull at my end of the rope till the Kettlebell made it all the way to the top and touched the beam then lower it back down, 3 sets, 5 times. Doesn't sound like much, but after all the stuff he'd gotten me to do, plus the other exercise I had to do in between it felt near impossible. When I started the first set, the 6 guys that were opposite us all stopped and watched, I'm sure curious too see if I was going to be able to lift it once. During my second set one of them suggested to put the weight on a pulley to make it easier, to which my PT replied that if he did that he would just have to give me a heavier weight, I then may have told the guy exactly what he could do with his suggestion. I did make it through all 3 sets (just).

Last night the level of evil was doubled, not only am I certain that he had evil for breakfast I'm pretty sure he had an extra helping. Needless to say last night there was a lot of swearing and me telling Daniel (he says his name is Daniel, I'm pretty sure his real name is Lucifer) exactly what I thought of him. I'm so sore today I'm surprised I can move the top half of my body at all (I sneezed at work this morning, it hurt so much I nearly cried). And I still have second day soreness to look forward too. BALLS.

The picture here shows what we did in my session, the dead lifts and hang cleans with the Kettlebells were fine, front squats were a challenge not only because of the weight but I do have difficulty doing squats in a warm up at pole with out falling over, add 24 kgs weights to that and things start to get interesting. The push press' however, OMG... I honestly thought I was going to drop the weights on my head (when I could actually manage to push them up over my head that is). Each set was supposed to be done with no breaks, I couldn't manage that, the first four sets I had to stop during the Push Press', the last set I made it all the way through without stopping, don't ask me how, I have no idea.

I found this website which has a whole heap of different Kettlebell exercises, you can browse by which area of your body you want to work on. Kettlebell Exercises .


I'm sure I'll thank Lucifer, I mean Daniel when this is all over.. just not right now.. Evil Bastard. (Seriously though if you're in the Penrith area and looking for an awesome PT, Daniel is freakn awesome).