Move over Justin Timberlake because Pole Dancers all over the world are bringing sexy back like it's never been brought before!!

Since United Pole Artists announced last week that they were declaring 9-16 July "Bringing Sexy back week" my Facebook feed has been flooded with the poster of Alethea Austin, along with girls (and guys) declaring to get their sexy on! AND I COULDN'T BE HAPPIER!! 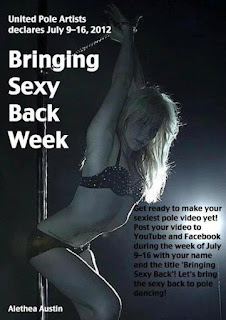 I'm all about the sexy side of pole dancing, and I honestly don't understand how anyone can pole dance without unleashing some kind of sexy. I don't get the whole pole fitness thing where you just do trick after trick after trick, to be honest, when watching videos like that on YouTube or even live performances like that I tend to zone out. There is really only so many times that I can watch the same tricks done over and over again by different people before it all becomes mush in my head (that also may have something to do with my very short attention span and the fact that I'm easily distracted).

Which is why I prefer to watch "sexy" pole dancing, because each persons sexy style is different which makes the moves and transitions that much more interesting.

Because sexy is a personal style thing, and it can help you make a routine your own (especially when you're doing a routine that you've learnt in class). I can't count how many times Chilli has told me that when Bobbi does one of the Pole Grooves routines, even though Bobbi is doing the exact same choreography as everyone else, the routine looks completely different because she's added her own style to it (which just happens to ooze sex, seriously if you haven't seen Bobbi dance do yourself a favour and look her up on youtube).

So you wanna get sexy? But how? Here is what I suggest:

1. Get YouTubing and look up people like Bobbi, Alethea Austin, Cleo, Felix etc and watch how they move (there are plenty more but these are my fav girls to watch). Also, check out my friend Lola Grace , this girl is amazing, such a bendy flex back, I love watching her get lost in the music.

2. Practice! In front of the mirror at home, check yourself out in the mirror when you're in class. Because sometimes what you think looks sexy looks like a hot mess. Video yourself as well, it'll help you find your own style and what works for you and your body.

3. Get Alethea's latest DVD's. They're awesomeballs BUY THEM HERE!

If you're not used to being "sexy" when you dance the whole thing can be a bit confronting, I can tell you know that I was pretty crap at the whole being sexy thing when I first started pole, but the more you do it the more confident you get and the easier it becomes.

So give it a try! Even if it's not for the official bringing sexy back week.

Bad Kitty Exotic Wear are also taking up the bringing sexy back week challenge and are having a "Pole Photo of the day - Bringing Sexy Back Edition" and guess who todays pic is of?? ME!! YAY!! I'm so excited!! If you want to nominate a picture (better get in quick) email the link with all the photo details to Bad Kitty's Facebook page. 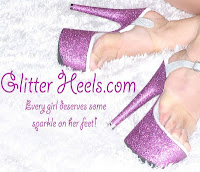 Also, in honour of Bringing Sexy Back Week Glitter Heels are offering 20% off all orders for the next two weeks!! All you need to do is use this code : sexyback20 . So if you've been waiting for a perfect opportunity to order some you now have it!