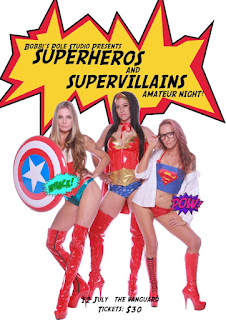 I love Amateur night!! It's always so much fun, but usually I don't get to watch much of it because I'm running around like an idiot getting myself or Chilli organised. Last night though, because all of the performers were at the end of the night (after the actual competitors) I got to see about 90% of the girls strut their stuff!

Last night things were run a little differently than usual, instead of all the girls from Beginners to Advanced competing against each other for 1st, 2nd and 3rd place it was broken down into 3 Sections Beginners and Intermediate 1, Intermediate 2 and Intermediate 3 then Prep Advanced and Advanced, with one winner for each section. I think this was part of the reason so many girls (I think there were about a total of 19) entered, because lets face it, what Intermediate 1 Studen wants to compete against an Advanced Student?

All the shows I saw were beyond fantastic, everyone put so much effort into their routines, themes, costumes and hair and make up. All I can say is thank god I didn't have to judge it because it would have been bloody hard!

I didn't compete, but I did do a show. I ended up changing my song choice two days before, and basically winging the whole thing. I think I've said before that I don't think that free-styling is one of my strong points but, as they say practice makes perfect. I did manage to do two deadlifts in a row which I was really happy about (really really happy, to the point where after doing the second one I really wanted to stop and go and shout over the music "HOLY SHIT BALLS!! DID YOU JUST SEE THAT??) but I didn't. There is only one thing I'm really bummed about which was the fact that I slipped out of my batwing AGAIN! Boo.. damn hands slipped off my legs. It really annoys me, I do the batwing so often in the studio, this is the second time I've done it on stage and the second time it's been a fail. Oh well as Ryder said to me, it's just one less that you stuff up! Hopefully all my stuffed up bat wings are out of the way and I'll nail it at MPD!!

After watching the video this morning, I've picked up on a few things I need to work on.. like walking.. so I don't look like I've had a few two many drinks before I went on stage, and a couple of other bits and pieces that in my head looked a lot better than they actually did on stage.

Most Likely to become a Stripper: Lolly :)

And a huge thank you to Ness, Lexxi, Ruby (and anyone else who was helping that I have forgotten) who made it such an amazing night!!

Here is a video of my "routine"