Winter, the Flu and MPD.

June 14, 2012
It's officially winter, but honestly it feels like it's been Winter around here for ages. Usually I enjoy this time of year, I love rugging up even though getting out of bed in the morning seems to be the hardest thing on the planet to do.

However, right now, I have no love for winter. I'm on my second consecutive day at home in bed (with the occasional trip to the lounge room for a change of scenery) after been struck down with the flu. I also spent Monday, I went to work on Tuesday but woke up even worse on Wednesday. Being a viral flu the doctor told me there is nothing much I can do but stay in bed, rest my body, drink lots of hot fluids and have three - four hot showers a day. I'm also lucky enough for this to be affecting my sinus and ears which is such a delight. I love having blocked ears and waking up every morning with my eyes glued shut.

On the plus side, I'm starting to feel better now, just have to shake this cough and get rid of that annoying ringing in my ears (you know that awful noise you hear when you've just gone to bed after being out all night in a club, that is what I'm hearing constantly).


But things aren't all crappy! Last week I had an appointment with Georgia from Georgia Moon Costumes to pick up a new costume that she'd made for me out of some material that I'd picked up at a fabric store. Not only that but we also talked and Georgia drew up the design for my costume for MPD! OMG I am so excited! I went with a few pictures and a couple of general ideas of what I wanted. The only things I was certain of were the colours I wanted and the theme of my routine. After about half an hour of discussions she had pretty much put down on paper exactly what I wanted, and I just hadn't known it! Georgia is amazing!! I cannot wait till my fitting at the beginning of August to see how it is coming along!

Also today I had a play around with my music and have managed to do a pretty decent job of it, even if I do say so myself. It's still a bit long at this stage so I still have some work to do but I'm really happy with how it's going so far, I honestly didn't think I'd be able to do this myself. Depending on how I go I hopefully won't have to ask someone to do it for me. YAY!! Once my music is all sorted I'll be able to start playing with choreography!! Well once I'm better anyway. 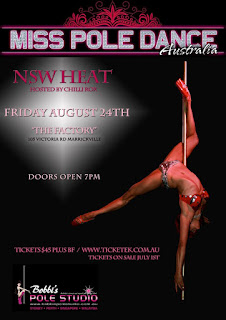 MPDA NSW Heat Tickets go on sale on the 1st of July! So if you're planning on coming put the date in your diary! Tickets can be purchased through Bobbis Pole Studio or Ticketek!!

Next week is my favourite week of term, WEEK 8 aka performance week!! I'm hoping I'm well enough to be back in class, actually no, I will be better by then, I want to go into the studio on Sunday and train for a bit! So bring on week 8 WOOOHOOO!!!!!!