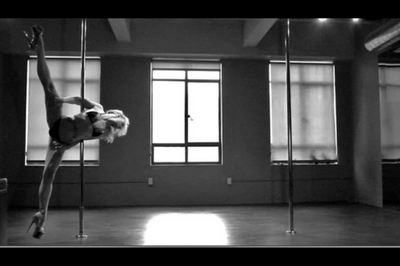 Everyone has a favourite pole move, and right now the Batwing is mine. This move was created by the amazing Alethea Austin and is a pretty advanced and painful move so be careful before you decide to give it a go.

I was lucky enough to learn how to do the Batwing from Alethea herself last year in one of her workshops when she was in Australia for MPD, I got it the first time I tried it however it didn't look any where as good as Aletheas and it hurt like hell.
Where did it hurt? Well before I tried it Alethea did warn that it killed her back every time she'd done it because the pole is across her back. I was lucky, my back was fine (I think it's because I have a bigger layer of fat there to protect my spine than she does), but my poor left forearm took a beating! For months and months and months of practising it I would end up with a huge bruise on my arm and depending on how many times I put myself through it I would get a lump underneath the bruise.

Like most new tricks there is a period of time you'll get bruised somewhere from it, and the Batwing (for me) was no exception. I still occasionally get bruises on my forearm and (now that I've lost a bit of weight and that layer of fat is not as thick as it used to be) it can sometimes hurt my spine.


I was asked during the week by some girls on the facebook group "Sharing the Pole" if I could do a video tutorial on how I get into the batwing. I've never done one before and I hate the sound of my voice on film so I decided just to video myself doing it as slow as I possibly could and posted some comments with the clip when I uploaded it on to YouTube.


I get into the Batwing from a no handed Allegra, which is pretty much the same as an Allegra however you have your left elbow hooked around the pole so that you can take your right hand off. The biggest tip I can give for this is to make sure that you tilt your hips forward so that you're not in a proper centre split. Also when you go into your right leg hang make sure that you bend your right leg in as much as possible, the pole needs to be as far up your thigh as possible. Once you're in the Allegra you can wrap your left (bottom) arm around the pole so that the pole is in your elbow, when you're feeling secure you should be able to release the right (top) hand from the pole.

The right hand then needs to find the (very) small gap near your waist, that is where your hand needs to thread through so that it can catch your hand can catch your thigh. This is probably the trickest part of the Batwing, the gap is a pretty small so getting your hand through can be near impossible, but it is doable. Sometimes I only get part of my hand through and have to wait till I start bringing my legs down before I can get my whole hand and arm through.

Once you've figured out how to get your hand through, lower your legs and catch your thigh with your hand (I think I grab my top thigh first), and that's pretty much it. I've attached a video of Alethea doing the batwing as well as my video for you :)

Alethea Austin's Batwing (at around 4:50)