May 15, 2012
Originally I was just going to share a link to an interview with Bobbi that I came across on Facebook, but decided that not only would I do that, but it would be a perfect opportunity for me to gush about one of my favourite pole dancers. So bear with me. this could go on for a while.

I remember the first time I ever saw Bobbi, I was in the lift at the the old studio, when the doors opened on level four there she was, I was with a friend of mine at the time, and after I picked my jaw from the floor I elbowed her in the ribs (possibly quite hard) and as we got out I turned to her, completely star struck and said, OMG did you see her? THAT WAS BOBBI!! It was like I'd seen a celebrity I was that excited! 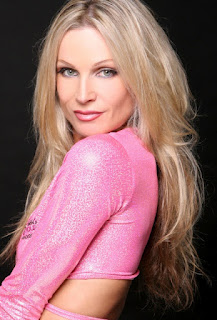 Before I go any further I should explain, when this happened I was in Intermediate One, and didn't spend quite as much time at the studio as I do now. I knew there was a Bobbi, I'd seen photos, I think I may have even had a DVD by this stage, but I'd never seen her in the flesh. Now this may sound a little weird, but for a while I used to refer to her as the unicorn of pole, a mythical being that you only ever heard about and saw photos of, but rarely would you catch a glimpse of her in real life (well for me, at this stage anyway)

The first time I ever saw Bobbi perform was in the Opening for Miss Pole Dance Australia 08/09, but nothing beats seeing her dance in a more intimate environment.

I can't remember what year it was, but it was a few years back Bobbi ran a Show Girl Class, for girls looking to learn how to put together shows etc. On Week 8 they performed their own choreographed show and lucky me was invited by my friend Silla Black, who was in the class, to come and watch.  After all the girls had performed Bobbi, did a show, OH.. MY.... GOD... it was seriously the most incredible thing I'd ever seen. I can't remember what exactly it was she did, but she just oozed sex appeal, watching her was mesmerising.

Now, I'm going to admit, that after this I had a bit of a pole crush on Bobbi, to the point, where if I ever saw her in the studio I would hide behind who ever was near me and pray to god that she didn't see me, let alone see me dance. The first time I ever talked to her I may or may not have been drunk, nothing like a few glasses of champagne to give you some courage. 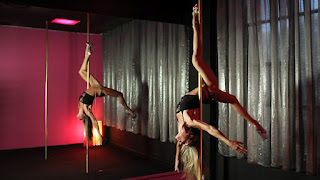 My First Class with Bobbi - Fast forward a bit, I was finally in Prep Advanced and Bobbi had announced she was holding a Advanced Pole Grooves Workshop for Prep and Advanced. I, of course, booked in straight away. I was so excited and on the day, well it would be an understatement to say I was shitting my pants. What if I was crap, what if I fell, what if I couldn't do anything of the routine, what if I was SO bad that she told me that I should quit pole dancing cause it wasn't for me! I sat in the corner of the class before hand as quiet as a mouse, which for me is a rare occurrence, a clear indicator that I was nervous. I made it through class and I learnt so much, Bobbi was so encouraging and lovely, I didn't have any reason to be worried at all.

In the last year and a bit Bobbi has been back teaching on and off and I've enrolled in her advanced classes and pole grooves workshops whenever I can, my parents even paid for me to have a private lesson with her for my birthday a couple of years ago!!  She is an amazing teacher, not only is she encouraging, but she explains things so well. I was talking to Porsche just the other day and she was saying that while you know how awesome Bobbi is, when you have her as a teacher, you remember just how awesome she actually is.

There is nothing better than dancing a routine that has been choreographed by Bobbi, whether it be a class routine, pole grooves, whatever. Her choreography is always incredible. I have a few favourites from the past few years, at this point nothing beats the Pole Grooves Routine (that later became a Prep Advanced Routine) we did to Foolin by Def Leppard. 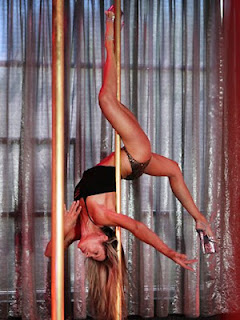 Then there is watching her dance, she is one of the most fluid dancers ever, half the time watching her you could forget that the pole was there, it's incredible. In the Interview (link below) Bobbi says:


So when people are like, ‘Do a show!” I’m like, ‘Alright well I’m not really what you think.. I can create the foundations and I can develop a showgirl, but I can’t necessarily do the most mind-blowing performance that you’ve ever seen.’ I don’t train enough to do that, cos that’s not what I want to do.

I'm going to say right there that she's wrong, her shows are always mind blowing, maybe not in the way that watching someone like Cleo, Jenyne Butterfly or Chelle Hafner bust out insane tricks that leave your mind wondering if they're actually human beings. Bobbi's shows are captivaing, and she has that presence about her when she's on stage that makes it impossible to take your eyes off her. She is like liquid on a pole, every transition is seamless and effortless. To be honest the only other person that I've seen that has that effect on me is Felix Cane. I can only hope to be half the performer/dancer that she is.

Okay.. I think I've gone on enough about Bobbi. below are the links to the interview on Chwennyland.com as well as some links to some YouTube videos ( Bobbis YouTube Channel ) of Bobbi. Enjoy!!

Bobbi Interview on Chwennyland.com - Part One

Bobbi Freestyling with Alethea and Wendy